The ROI case for omnichannel support

Offering support across multiple channels is becoming more popular than ever as companies seek new ways to improve customer experience. According to the Aberdeen Group, companies doubled the number of channels they use to interact with customers between 2012 and 2017.

But providing support on a few channels and delivering a truly integrated omnichannel solution are two different things. With data from the Zendesk Benchmark, our index of product usage data from more than 45,000 Zendesk customers in 140 countries, we examined why companies are going omnichannel and what sets the companies using Zendesk for omnichannel support apart from everyone else. Ultimately, we discovered a tangible ROI in terms of improved efficiency and an all-around better support experience for customers.

Our findings should be a wake-up call: Become an omnichannel company or risk getting left behind. 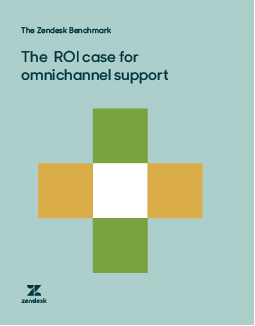 More efficient support
Among Zendesk Benchmark companies, those using an integrated omnichannel solution outperform those who stick to a limited number of channels or operate channels in silos. Their customers spend less time waiting for responses, resolve their issues faster, and are less likely to require follow-ups.

Heightened ability to meet customer expectations
Customers want to move seamlessly across channels. Since 2017, a majority of customers with multiple tickets used more than one channel.

Live channels are being swiftly adopted
For integrated omnichannel companies, live channels are on track to surpass email and webform in terms of the share of a support team’s workload they represent.

The ROI case for omnichannel support