Learn how Azerbaijan Airlines used self-service and improved agent collaboration to face a 72% increase in support requests year over year. 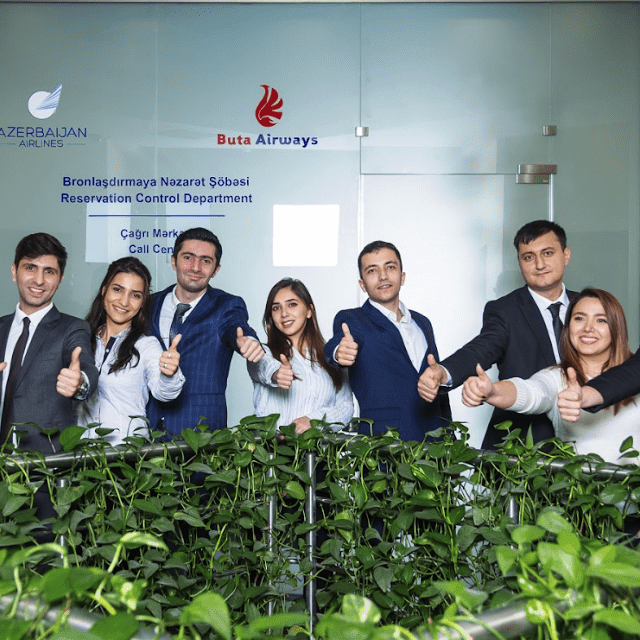 “Zendesk enabled us to organize processes across the organization and make them as transparent as possible. Not only did we streamline the help desk workflow, but we also connected its processes to other departments of the airline. That helped us create a single support environment and bring the entire process under management control.”

“If we were still using the tools that our company had before implementing Zendesk, even 100 staff members would not be enough to handle the current workload.”

In 2015, AZAL was included in the prestigious list of 4-Star airlines and was named the best regional airline company for Central Asia and India in 2018 according to Skytrax. In its efforts to go the extra mile and keep pace with the times, AZAL has created Buta Airways, a low-cost carrier subsidiary, which operates a fleet of Embraer aircraft.

While the company expands its fleet and range of destinations, AZAL has also kept a close eye on customer support. For a time, AZAL worked with separate help desk channels, but it became increasingly apparent that for its customers, this was not good enough. Like customers all over the world, AZAL’s passengers had little patience for holding while a staff member searched for the correct help desk channel.

“The moment had come when we realized that our tools did not allow us to provide technical support across all channels at our working pace,” said Anar Aliyev, AZAL public relations specialist. “The worst thing was that before Zendesk, the help desk channels were not coordinated. We had to manually redirect customers, who often sought help with urgent issues, to the relevant channel.”

After testing several help desk products, AZAL switched to Zendesk Support in 2017. It took AZAL around three months to adapt to the new omnichannel system and train the staff. Initially, Zendesk was only rolled out to Buta Airways, but after only a few months of testing, AZAL arrived at the conclusion that both air carriers needed to be on the platform. Today a single team of customer support agents use Zendesk support both brands.

That team fields more than 200,000 support requests per year, with more than half of them being generated during the summer holiday period of June to September. “When everyone is on holiday, we work,” Aliyev said.

In recent years, AZAL has seen its customers’ preferences change, which has resulted in support requests shifting from phone to text. Currently, about 60% of all AZAL and Buta Airways tickets are received via email and WhatsApp. While just 10% of the company’s clients are using its mobile application, AZAL expects that the number of users will increase in the coming years.

Because agents must resolve issues that are frequently stressful for customers, the support team is available 24 hours a day, seven days a week. Normally, agents are responsible for either AZAL or Buta Airways tickets, but Zendesk’s flexibility enables them to shift gears when one of the brands sees a spike in requests.

Compared to 2018, the number of tickets received annually increased significantly, rising from 120,000 to 207,000. While the number of passengers also increased during this period, that growth didn’t match the number of the tickets. Aliyev links this to the development of Buta Airways. “Passengers flying with the budget airline always have more questions, because it is a relatively new service,” Aliyev said. “A lot of customers do not fully understand the terms on which the low-cost airline offers its tickets.”

Thanks to Zendesk, AZAL agents are able to cope with this workload without additional help, even during the peak holiday period. Despite a 72% increase in support requests over the past year, the team of agents has grown by just 42% (from 35 in 2017 to its current level of 50). Meanwhile, agent productivity has doubled over the past year—a testament to moving away from using a general email inbox, etc.. “If we were still using the tools that our company had before implementing Zendesk, even 100 staff members would not be enough to handle the current workload,” Aliyev said.

Speed is key to customer satisfaction

One of the main advantages Zendesk offers is its set of tools designed to speed up ticket resolution. For that purpose, the airline uses a great number of templates and macros, while also offering customers a self-service option via Zendesk Guide. “We receive lots of requests, but more than half of them are repetitive questions about common subjects,” Aliyev said. “The rules covering ticket refunds, loss of baggage—these are the questions that our team deals with most often.”

The AZAL articles published in Guide receive about 9,500 unique views per month. The airline’s agents make regular updates to the knowledge base content based on first-hand experience. “The help desk staff members keep telling us how comfortable they feel working with Zendesk,” Aliyev said. “It opened up new possibilities in all aspects of their work, from macros to analytics.”

The interaction between management and the support team has also become clearer and more effective. “Zendesk enabled us to organize processes across the organization and make them as transparent as possible,” said Deputy Executive Officer Nazim Samadov. “Not only did we streamline the help desk workflow, but we also connected its processes to other departments of the airline. This helped us to create a single support environment and bring the entire process under management control.”

The evolution of AZAL and Buta Airways’ help desk allowed both brands to reach new heights in terms of customer service. Today, AZAL is well ahead of the average scores in all the key indicators of its industry. The customer satisfaction rate for AZAL and Buta Airways remains steady (83%–86%), which is roughly 10 percentage points better than the average industry score. The company’s first reply time is only 6 minutes—a whopping improvement compared to the industry’s average first reply time of 31 hours. On average, it takes the company just 42 minutes to close the ticket, which is also considerably faster than the industry average.

For AZAL, there’s nothing more important than speed. “We often receive questions that need to be resolved within a few hours before the passenger’s flight,” Aliyev said. “For clients, this is a stressful situation, where they want to get help as soon as possible.” That is why the dramatic increase in the number of tickets resolved in one touch became a particularly significant achievement. Today, 43% of the airline’s clients receive an answer to their question during the very first interaction with the support team.

“Zendesk offers very flexible and convenient tools, which enable the agents to quickly adapt themselves to solving new tasks and provide extremely fast support,” Aliyev said. “Everything that is needed for providing a high-level support service to the end customer can be found in Zendesk.”