Google Messaging Services Get a Boost with RCS

Is RCS just another Google messaging service or the future of SMS? 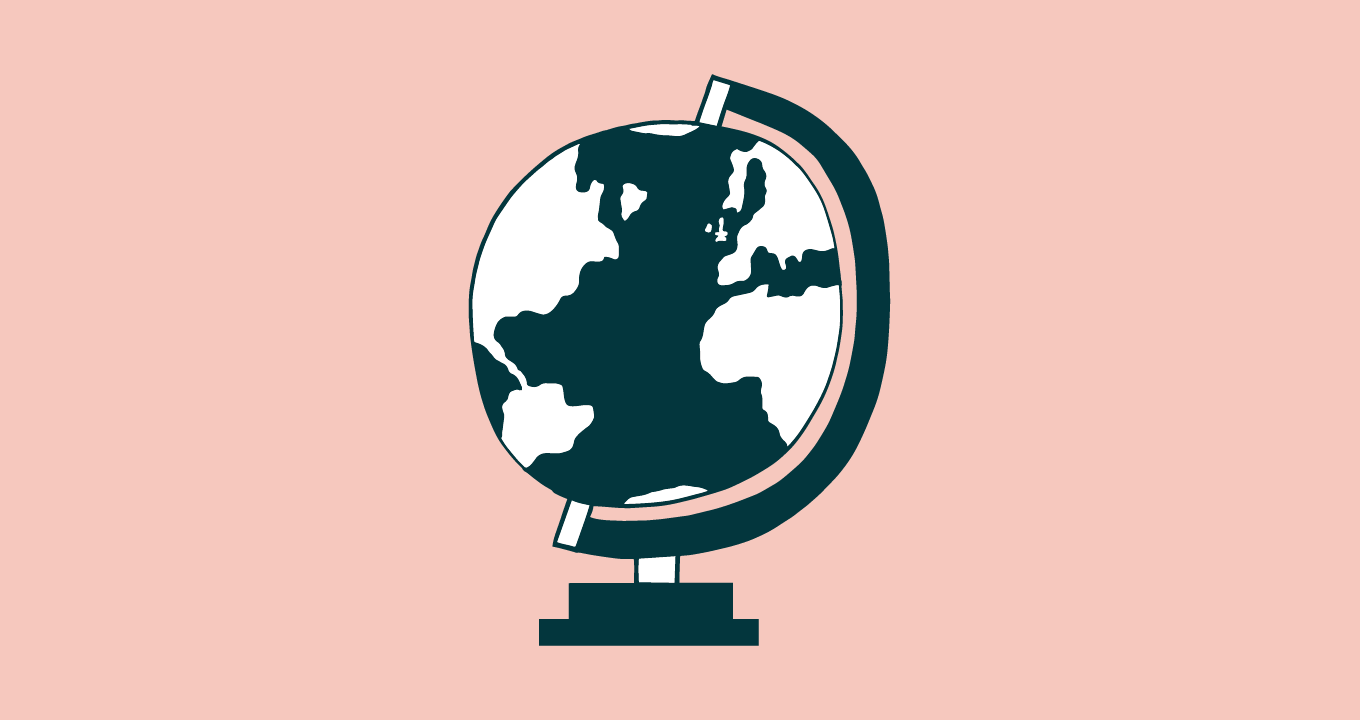 It has been dismissed as a "zombie technology" and anticipated as the savior of SMS. After 10 years of fits and starts, RCS — the next generation text messaging technology — may have finally found its champion.

Many see the campaign as part of Google's effort to challenge Facebook and Apple in the ongoing business-to-consumer messaging services wars. Joining Google in their Early Access Program is Sprint in the US and Telcel in Mexico, along with big-name brands like Booking.com, Subway and Walgreens.

For the telecoms, RCS business messaging is an opportunity to stave off insurgents like WhatsApp, which has already stolen a massive share of SMS in the lucrative battle for the application-to-person (A2P) messaging market. A2P messages include receipts, flight notifications, banking updates and other alerts businesses send to subscribers. The A2P industry is worth roughly $55 billion and is expected to reach $70 billion by 2020.

At the moment, A2P messages are sent almost exclusively via SMS, with businesses footing the bill. This makes A2P one of the last fronts on which carriers are still beating the OTT channels and monetizing text messaging. But with the upcoming launch of WhatsApp’s enterprise API and its early focus on ticketing applications, from travel to entertainment, Facebook appears to be eyeing a slice of the A2P pie.

With RCS back in the news, here’s an overview of what the technology is, what Google is up against and why it matters to businesses and the software makers they rely on to communicate with customers.

What is RCS and why has it taken so long?

RCS, or Rich Communication Services, is the next generation of text messaging standard. RCS capabilities might include richer media sharing and native in-messaging features typically more characteristic of messaging services like WhatsApp, Messenger, and iMessage

If it feels like you’ve been hearing about RCS for a decade, you’re not wrong. Back in 2008, a group of 30 telecommunications carriers and device makers, under the umbrella of the GSMA, announced the Rich Communication Suite (RCS) initiative. It’s mission: to enable "interoperable enriched communication including in-call multimedia sharing, conversational messaging and presence-enhanced contact management for mobile and fixed customers." This meant developing and adopting a new generation of text messaging standards — an SMS for the modern messaging age. 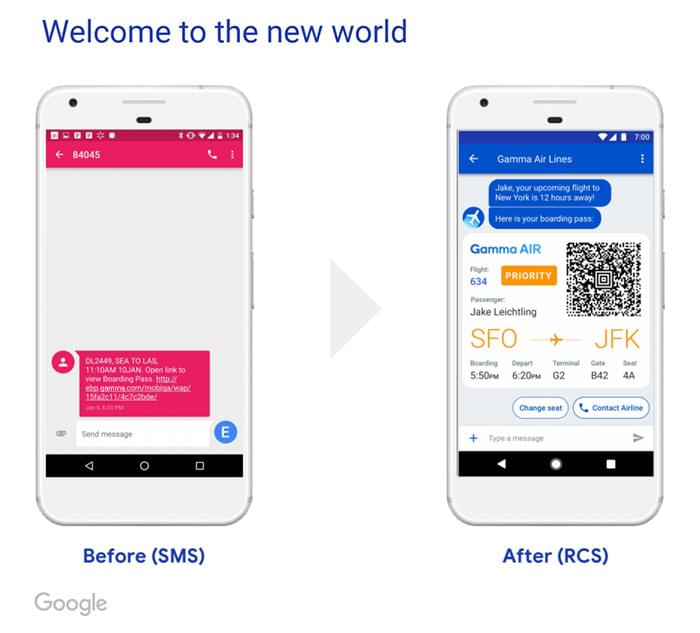 The timing was right. As industry analyst and RCS skeptic Dean Bubley has noted, this announcement came only a few months after the launch of the first iPhone and before Apple introduced the App Store. It was also the same month Facebook unveiled what would become Messenger.

But the industry consortium wasn’t able to move nearly as fast as Facebook or Apple and "interoperability" proved hard to realize among a group of global competitors more interested in distinguishing themselves than playing nicely together.

Over the course of the past decade, the effort has ramped up and stalled on numerous occasions. Needless to say, widespread adoption of RCS remains a dream deferred.

Meanwhile, OTT services like Messenger, WhatsApp, Line, Telegram and others have won over billions of consumers, offering a modern messaging experience far superior to SMS at relatively no cost to users. Consider that WhatsApp and Facebook Messenger alone carry trillions of messages per year, far eclipsing the total P2P SMS market.

Taking a cue from Research in Motion and the one-time popularity of its exclusive Blackberry Messenger (BBM), Apple made iMessage the de facto messaging service across its devices, helping to earn the loyalty of a generation of customers.

Yet another Google messaging service

Then, in late 2015, Google entered the fray. They announced they were "committing to RCS" and acquired a startup called Jibe to help bring RCS to Android products and carriers worldwide. Last year, Google made RCS the default standard in its rebranded "Messages" app, which comes preloaded in most — though not all — Android phones.

This, of course, is an addition to Google Business Messages, and a variety of other Google messaging services that have come and gone with varying degrees of success, including Google Hangouts, Google Talk, Google Buzz, Google Allo, and Google Chat, with Google

Visiting from the future? Get the latest on Google's 2020 messaging strategy
Read more

This meant messages sent between people using both RCS-compatible phones and RCS-enabled service providers would be sent using the richer standard, rather than SMS. However, if anyone in the conversation used a phone or carrier that hadn’t adopted the new standard, the message would still fall back to SMS or MMS.

As The Verge noted, "it’s complicated." And the most important phone makers, Samsung and Apple, were conspicuously absent from the announcement, as were the leading U.S. carriers, Verizon, AT&T and T-Mobile.

This brings us up to speed with what to expect with RCS at Mobile World Congress next week. Last year Google launched an Early Access Program for businesses to be among the first to offer their customers an upgraded messaging experience, highlighting enterprise-friendly capabilities like branding and verification. 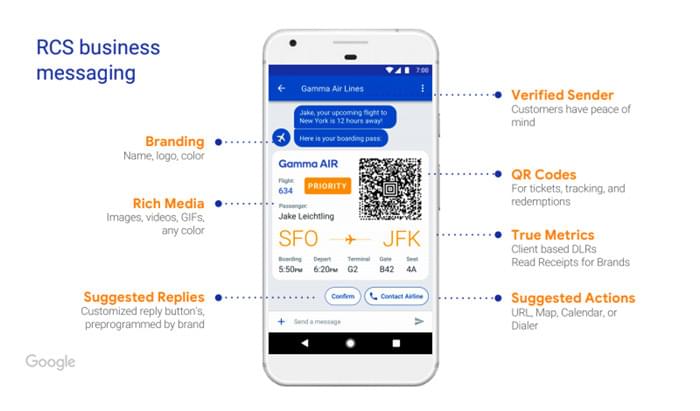 Now businesses are starting to roll out messages to their customers with RCS in the U.S. and, soon, Mexico.

A growing list of device makers and global carriers have jumped on board as well, though key players like Samsung and Verizon remain elusive.

Amir Sarhangi, the Head of RCS at Google, told The Verge that the goal is to build "momentum" and bring on enough businesses, carriers and manufacturers that adopting the standard becomes a no-brainer.

With Android phones boasting 80% market share and OTT usage still fragmented across dozens of apps, it’s not a crazy bet. Still, mass adoption may depend on Apple adopting RCS (instead of SMS) as the fallback for sending and receiving messages with non-iPhones, something it may have little incentive to do. In fact, Apple may go in the opposite direction and make iMessage a cross-platform channel, challenging Google on its own Android playground.
Later this year, Apple will launch Business Chat, enabling customers to message businesses through iMessage.

Customers will be able to initiate conversations by clicking on links in Safari, Apple Maps and through Siri-enabled devices. Given Google’s search and map dominance (including on iPhone) and Android’s 80% market penetration, it’s not hard to imagine Google pursuing a similar strategy if it can overcome RCS’ adoption and interoperability obstacles.
For now though, Google seems to be seizing on the $55 billion A2P opportunity, which makes Facebook — via WhatsApp — its primary rival and the telecoms its key allies in the fight.

With 1.3 billion monthly active users on WhatsApp and Messenger not far behind, Facebook may be able to take a decent bite out of the A2P market. That makes next week's Mobile World Congress a crucial opportunity for Google and its partners to woo businesses before they abandon SMS altogether and throw their lot in with the chat apps.

Perhaps the modern messaging ship has sailed, leaving RCS in its wake. Or maybe the situation is finally desperate enough for mutually interested parties to band together and make the great RCS hope into a reality.